The Rütli meadow
The Rütli meadow was landscaped in the 19th century. The name Rütli derives from the word “Grütli” – a forest clearing – indicating that this was once an area used for agricultural purposes. Since the 15th century the site has been held to be the meeting place of the Old Confederates during their struggle for independence. 1804 saw the publication of Schiller’s drama Wilhelm Tell. In his play, Schiller merged the story of the Rütli Oath with the legend of William Tell, and set the action on the Rütli. This led to an upsurge in international interest in the location of the drama and the Rütli meadow was consequently given a softer new look in the 19th century. Thousands of trees and shrubs were planted on its periphery, with renowned landscape architects participating in the redevelopment.

The Site of the Oath 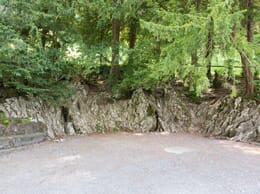 The Site of the Oath, below the Rütlihaus Restaurant, is considered to be the spot where in 1291 the three Forest Cantons of Uri, Schwyz and Unterwald swore their oath of allegiance. In the 19th century none other than German architect Gottfried Semper submitted two designs for the site. In the end, however, a natural-looking option was preferred: a limestone rock was brought from Schwyz, from which three water features emerge, symbolizing the three original cantons. 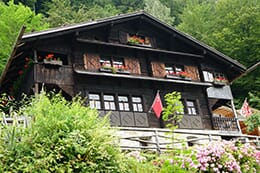 The Rütlihaus was built in 1868–69 to plans drawn up by Johann Meier, an architect from Schwyz, for a smart wooden building in traditional Uri farmhouse style. Guests are served in three attractive, comfortably furnished rooms, or on the terrace, which enjoys superb views. 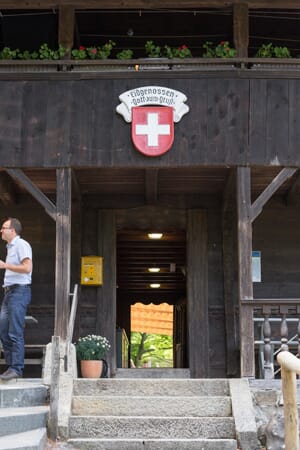 Stamp collectors will have a field day on the Rütli. Postcards are stamped by hand at the Rütlihaus. On the Rütli, the plan is to create National Day cards that will be known as “maximum” cards, with the postcard, stamp and postmark all featuring coordinated motifs. 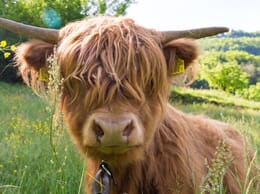 The Rütli is unusual in that the national monument is a landscape, which means that the land is looked after in a very special way. Three hectares of organic meadows and pastureland are farmed sustainably, providing grazing for two to three cows, and ewes, goats and pigs. Since 2015, Highland cattle have also grazed on the Rütli meadow. The Highland cattle are particularly popular with the local farmers, as they are not dehorned. The breed, which originates in Scotland, enables an optimal closed nutrient cycle to be maintained and keeps the meadowland in extremely good condition. The cattle are highly suited to difficult terrain, as they do not create terraces and cause next to no soil damage – less than Grauvieh or Braunvieh cattle. Scottish Highland cattle are also very easy to care for and can be left outdoors in all weathers. And whereas it used to be necessary to keep the timid Braunvieh and Grauvieh cows in cattle sheds during the day because of the tourists, the Highland cattle have no fear of contact with the visitors. 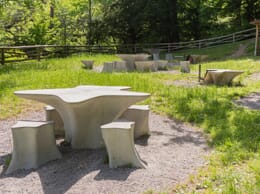 The large picnic area is a popular spot, with several fireplaces, a drinking fountain and tables. Our strategy for dealing with litter on the Rütli is a simple one: everyone must take their rubbish home with them. This ensures that all visitors can share in the undiminished enjoyment of the Rütli experience. 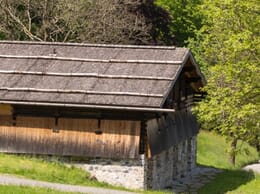 The Upper Barn situated directly below the Rütli meadow has several functions: Downstairs there are toilet facilities for visitors. During big events, two rooms are used for organizational purposes and logistics, and for sanitation and security. The upstairs hall is used for exhibitions, but can also be used for event catering. The kitchen is used when large-scale events are held. On the third Sunday in October it is used by the participants in the traditional pistol-shooting contest. 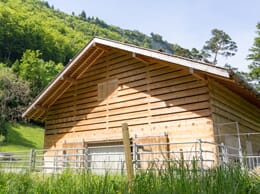 The stable building behind the Rütli meadow has room for the cows, goats, sheep and pigs, and storage space for hay. 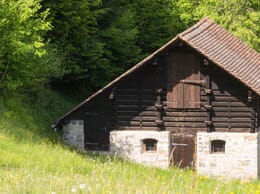 The Lower Barn was previously used as a display room for the “Memo”, a small exhibition about the Rütli. In future the building is to be given over to use by visitor groups. 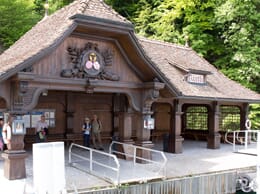 The landing stage with its open-sided wooden building was built in 1913 to a design by August Am Rhyn.

Things to see nearby

The Swiss Path (Rütli to Brunnen, via Flüelen)

The Swiss Path was created to mark the 700th anniversary of the existence of Switzerland. Each canton along the 35-kilometre walk around the southern area of Lake Lucerne (known as Lake Uri) is represented with its own section of the trail. You can explore the history of Switzerland up close on Lake Uri or discover the Reuss delta conservation area. The Swiss Path is an ideal walking trail for the whole family, with a variety of routes to choose from: short or long, easy or challenging. The Swiss Path is designated as a regional route of the Schweiz-Mobil/Wanderland network and signposted along its length as route no. 99. The “Waldstätterweg und Weg der Schweiz” guidebook in the “Kulturlandschaft” series is a handy companion – available in German only. www.weg-der-schweiz.ch/de/ 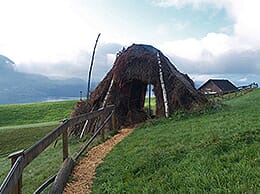 The Waldstätter trail was inaugurated in 1991 as the contribution of the cantons of Central Switzerland to the 700-year anniversary of the Confederation. The trail forms an extension of the Swiss Path and circuits all four arms of Lake Lucerne from Brunnen round to Rütli. The Waldstätter trail is designated as a regional route of the Schweiz-Mobil/Wanderland network and signposted along its length as route no. 98. The Waldstätter trail can be tackled as a long-distance walking tour in its entirety, in sections or in individual one-day stages. At fifty locations along the route walkers will come across electronic apps telling the story of tourism and agriculture in the Lake Lucerne region through text, illustrations and historical film and audio clips. The “Waldstätterweg und Weg der Schweiz” guidebook in the “Kulturlandschaft” series is a handy companion – available in German only. Tourist requirements along the historic route (rail travel, hotels, restaurants, etc.) can all be booked in advance. There is also a new web-based learning platform, “Lernen unterwegs”, aimed at school pupils and teachers. www.luzern.com, www.myswitzerland.com 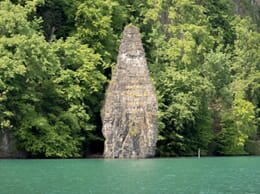 The boat trip from Brunnen to Rütli takes you close by the Schiller Stone, a natural rocky outcrop right at the entrance to Lake Uri. It was originally 34 to 40 metres in height and known as the Stone of Myths. In 1838 the top third of the Stone was demolished, as falling rocks had become a hazard to the boats below. In 1859 the Landamman (chief magistrate) of Schwyz, Carl Styger, decreed at the centenary celebrations taking place on the Rütli in commemoration of Friedrich Schiller that the rock, which with its natural pyramid shape already had the appearance of a monument, should be dedicated to the honour of the poet. The Schiller Stone was officially inaugurated on 21 October 1860 with a large number of vessels in attendance on the lake. An inscription with letters of gilded ore reads: DEM / SAENGER TELLS / F.SCHILLER / DIE URKANTONE / 1859. (TO THE SINGER OF TELL / F. SCHILLER / THE FOUNDING CANTONS / 1859). www.weg-der-schweiz.ch

The Treib Inn, on Lake Lucerne 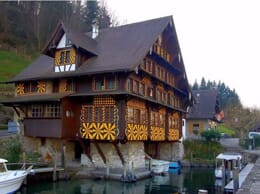 The “Treib” is an old harbour, sheltered from the Föhn wind. We can be fairly sure that there has always been a ferry service connecting Seelisberg with Brunnen, and there are records of an inn here going back to the Middle Ages. On many occasions the inn served as a meeting place for the three Old Cantons and other assemblies of the cantons of the Old Confederacy. www.weg-der-schweiz.ch 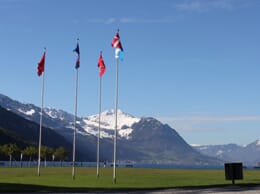 Switzerland would not be complete without its many citizens who are resident in other countries. This site therefore recognizes the 700,000 Swiss people living abroad today and also represents their close bond with Switzerland. The Swiss Abroad Remembrance Ground is often called the “Rütli of the Fifth Switzerland” [a reference to the four language areas of the Swiss nation]. To reach the site, head west along the shore of the lake from the landing stage and go past the Waldstätterdorf Hotel towards the Föhn harbour. www.weg-der-schweiz.ch

The Bundeskapelle (Federal Chapel) in Brunnen 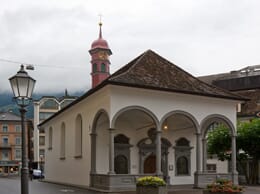 The chapel in Brunnen, known as the Bundeskapelle, stands on the very spot where the Rütli Oath of 1291 was renewed in the year 1315 after the Battle of Morgarten. From that point on, the Founding Cantons of Uri, Schwyz and Unterwalden referred to themselves as Confederates. This delightful chapel is in the centre of Brunnen, very near the landing stage and bus station. It is about seven minutes’ walk from the train station. www.brunnentourismus.ch

The Tell Memorial in Altdorf 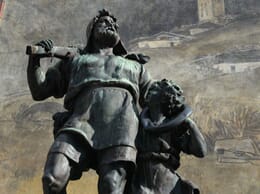 The bronze statue of William Tell by Richard Kissling was unveiled in 1895. The sculpture was commissioned by politicians who prescribed exactly how the artist was to portray Tell – as a libertarian, a proud, spirited, determined man wearing the local peasant costume. www.ur.ch 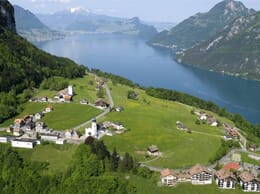 Perched high above the Rütli meadow is the pretty village of Seelisberg, which has a population of 700. Located at an altitude of 850 metres and surrounded by stunningly beautiful scenery, the village is also known as the “sun terrace over Lake Lucerne”. In addition to panoramic views over the lake, Seelisberg has a number of other attractions: the Maria Sonnenberg pilgrimage chapel, St Michael’s church, the chapel of St Anna in Vollingen, the Schlössli Beroldingen manor house, the old Chalcherli house and an idyllic little lake with campsite. www.seelisberg.ch 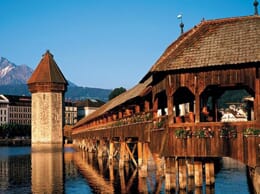 Lucerne has many interesting things to see and do packed into a small space. The hallmark of Lucerne is the Chapel Bridge and its water tower – Switzerland’s most photographed landmark. www.luzern.com

The main attractions for younger visitors include the Glacier Garden www.gletschergarten.ch and the Swiss Museum of Transport www.verkehrshaus.ch.