For the first time ever, a ring of sawdust was laid out on the Rütli meadow. Following a two-year delay due to corona, the SSCG joined with the Swiss Wrestling Association to celebrate the latter’s 125th anniversary and showed how the sport of Swiss-style wrestling embodies “peaceful combat” in action. In Silvio Rüfenacht and Arnold Ehrensberger, both former wrestling champs, or “kings”, as they are known, the Association ensured the National Day celebration was blessed with a royal presence. Referring to the tradition of Swiss wrestling, Nicola Forster, President of the SSCG and host of the Rütli event, said: “The wrestlers symbolize what I would wish for in our society; that people can have their differences but come together again and pat the sawdust off each other’s backs.” Markus Lauener, Chairman of the Swiss Wrestlers: “It was an honour for us to be part of this unique event and to show what we understand by fair play and sporting coexistence.”

Peaceful combat was the motto of this year’s National Day celebration on the Rütli. “For a vibrant, functioning democracy, we need to reach out to each other and tolerate differences of opinion if we are to move forward as a society,” said President Nicola Forster, stressing the vital significance of the topic. Nora Wilhelm, social entrepreneur and co-founder of the collaboratio helvetica organization, was equally clear about her beliefs: “Switzerland should draw on its cultural heritage and its long tradition of dialogue across language barriers and religious differences and bring the various sectors together to meet the challenges of our time.” In his speech, Marco Solari, President of the Locarno Film Festival, stressed the importance of using the “power of personal relationships to strengthen our direct democracy based on deeply held political conviction. Not only for the good of Switzerland but a united continent of Europe.”

#Letstalk: striking up dialogue on and off the Rütli

The last two years have been challenging for us all and strengthened SSCG’s resolve to work even harder for social cohesion and to engage people in dialogue. At the National Day celebration, Pro Futuris, the SSCG’s new Think + Do Tank, launched a format for exchange called simply #Letstalk. It aims to get people with different opinions talking to one another. On the Rütli meadow, it worked to perfection: hundreds of individuals with widely differing views found themselves engaged in animated discussions. The #Letstalk project was scheduled to take place throughout Switzerland by the end of August. Interested parties can still register at lasstunsreden.ch.

The Swiss Society for the Common Good (SSCG) bought the Rütli meadow and presented it to the federal government in 1860, and has since then been responsible for its management. With the Rütli and the National Day celebration on 1 August, the SSCG consciously promotes a sense of unity in Switzerland. In recent years, the SSCG has invited a series of organizations to the Rütli celebrations and, in the process, helped to reinforce this cohesion.

Please mention the photographer’s name if you use pictures: Marco Zanoni 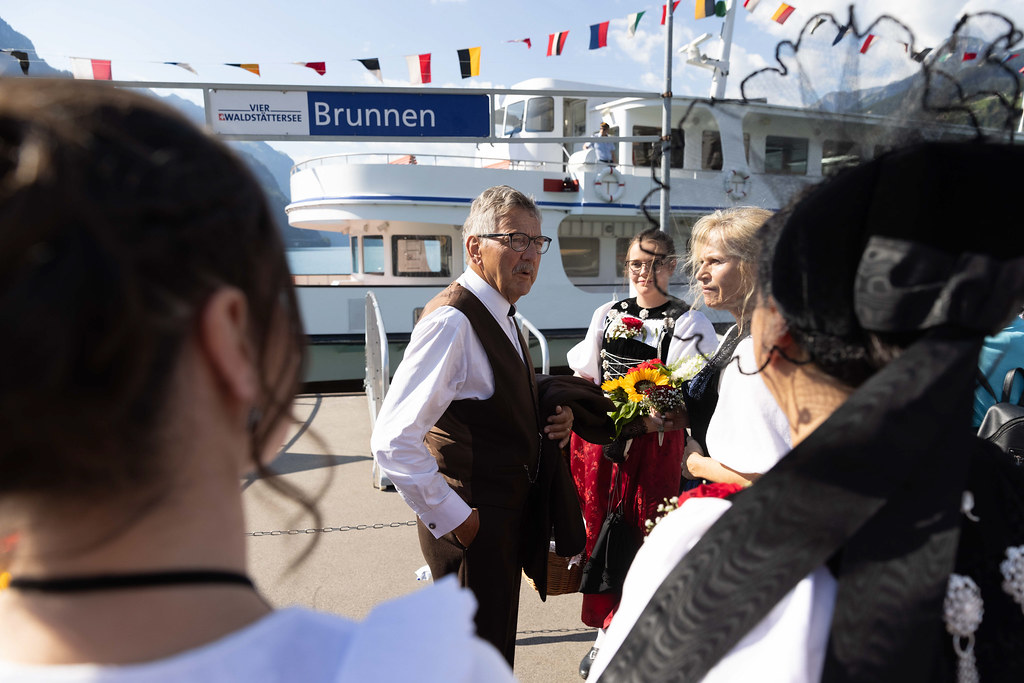 The “bad guys” are coming! Registration closed – admission only with Ticket.

Annual Report 2021: SSCG in a state of constant flux

SSCG Conference on Volunteer Work 2022 Commitment for the over-65s