Swiss Volunteering Survey
Since its foundation in 1810, the Swiss Society for the Common Good (SSCG) has encouraged active involvement from Switzerland’s civilian population. Since 2001, it has paid particular attention to carrying out research into and promoting voluntary work. The SSCG firmly believes that voluntary work is the glue that holds societies based on solidarity together and that in the long term many vital social services can be guaranteed and financed only through the encouragement of voluntary work.

In the past, the SSCG has promoted voluntary work in the following areas:

Unlike most neighbouring countries, Switzerland has no state-supervised volunteering strategy and does not carry out systematic research into voluntary work. The SSCG, therefore, decided in 2002 to conduct a broad-sweeping survey on the status quo of voluntary commitment in Switzerland and thus create a well-documented source of information for research into the country’s volunteering efforts. Following studies in 2007, 2010 and 2016, the SSCG plans to carry out a fourth research project into the status of voluntary work in Switzerland and publish it in the Swiss Volunteering Survey 2020. Two-thirds of the questions in the survey will be identical to those of 2007, 2010 and 2016, which should help us to highlight trends in voluntary activity in Switzerland. The remaining questions will serve to provide fresh insights into the issue of voluntary work. The Volunteering Survey is a scientific instrument with a practical orientation and was designed to identify the level of willingness for public commitment and at the same time serve as an indicator of social change.

The Swiss Volunteering Survey was originally initiated and is maintained by the SSCG and is sponsored by the Migros Cultural Percentage and the Beisheim Foundation, as well as 30 other partner organizations. It is supported by the Federal Statistical Office and is under the scientific guidance of the research institute Lamprecht & Stamm with the collaboration of the survey institute LINK.

The Swiss Volunteering Survey project group, under the aegis of the SSCG and its Volunteering Research Committee, is responsible for the operation of the survey.

The members of the project group are:

The Swiss Volunteering Survey 2020 provides information on the current state of voluntary activity. It is already the fourth Volunteering Survey the Swiss Society for the Common Good (SSCG) has published since 2006 with the support of the Migros Culture Percentage, the Beisheim Foundation, the Federal Statistical Office and 30 other partner organisations. For the latest edition of the Swiss Volunteering Survey, in 2019 some 5,000 people answered detailed questions about their social engagement. Participants were selected randomly by the Federal Statistical Office from population registers and represent the Swiss residential population from the age of 15. The most important results can be summarised as follows.

Thirty voluntary organizations, relief organizations, foundations, NGOs, professional associations, companies, communities and cantons are partners of the Swiss Volunteering Survey. They benefit from exclusive information, advance notice of results, individual assessments of survey data relevant to voluntary work in Switzerland and have a say in the key content of future nationwide surveys.
There are essentially three forms of partnership: partners with a voice, results partners and project partners.

Results partners
– have access to evaluations of survey results tailor-made to the needs of their organization;

– are named in the Volunteering Survey publications;

– have the privilege of receiving documentation for strategic planning in the voluntary work sector;

Partners with a voice
In addition to the benefits of a results partnership, partners with a voice are entitled to a say in the content of a new bulletin. They can approach the research team with their experience and concerns, discuss the questionnaire for the pilot survey and have a say on the topics and questions to be covered in bulletins. The annual fee is CHF 2500.

If you are interested in a Survey partnership or require further clarification, please contact SSCG management directly: lukas.niederberger@sgg-ssup.ch 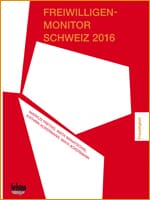 The Swiss Volunteering Survey is a reliable source of information about volunteer work in Switzerland. It publishes current figures about the level of commitment in civil society and enables us to make forecasts about future trends. Founded by the Swiss Society for the Common Good (SSCG), the Volunteer Work Bulletin is sponsored by the Migros Culture Percentage and supported by the Federal Statistical Office (FSO). The 2007, 2010 and 2016 editions of the Bulletin were supervised by the Institute of Political Science at the University of Bern. Thirty companies, associations, foundations, relief organizations and state institutions are entitled to become partners of the Volunteer Work Bulletin, receive exclusive evaluations of the data collected and submit specific questions for examination.

You find the data of the Volunteer Survey 2016 at the FORS : forsbase.unil.ch

Further information on the FORS / DARIS – Data and research information services, on the Website forscenter.ch/en/

Fig. 3: Volunteer work in organizations and associations, by association type, 2014