Over 2000 guests at National Day celebrations on the Rütli

In gorgeous weather conditions, more than 2000 people celebrated the 728th birthday of the old Swiss Confederation on the Rütli meadow.

The leitmotif for this year’s National Day celebrations was militia work as a commitment to society. For this reason, the SGG invited the Swiss Municipalities Association (SGV) with around 200 municipal representatives to the cradle of the Swiss Confederation. The Association has launched a “Year of Militia Work”. And the Swiss Fire Brigade Association, which celebrates its 150th anniversary, mobilized around 700 fire-fighters on the Rütli. Hannes Germann, President of the Swiss Municipalities Association and a member of the Council of States from Schaffhausen, stressed that militia work opens up new horizons in politics and social organizations. According to Laurent Wehrli, President of the Fire Brigade Association and National Councillor from Vaud, the militia system offers everyone an opportunity to use their skills and abilities for the good of society but also demands sacrifices, not least from families. In her speech, Heidi Z’graggen, member of the cantonal government of Uri, also addressed the topic of militia work and discussed possible incentive schemes to promote this state commitment: compensation, tax relief or recognition of militia work as further training. Carmelia Maissen, Mayor of Ilanz, pointed out the importance of militia work, especially in rural areas, where there are fewer professionally linked structures than in towns and cities. But the National Day celebrations owed much of their appeal not only to the speeches but also to the lively musical and scenic elements. Lisa Stoll’s performance on the alphorn and the troupe of young flag-swingers from Weggis were no less impressive than the Amriswil project choir and the children who performed the play “Tell – quick and cheeky” by comedian Florian Rexer. As in the previous three years, after singing the Swiss Psalm, participants joined in a rendition of the proposed new text, “White Cross on Red Ground”, to the traditional melody of the Swiss national anthem. The Rütli leaseholder’s team served up delicious helpings of bratwurst, potato salad and vegetable balls before the 2000 guests made their way back to their homes in all parts of the country to be part of celebrations going on well into the evening. 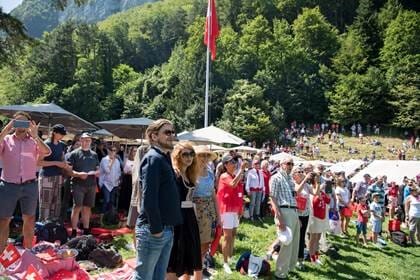 The 2000 guests sing both hymn versions 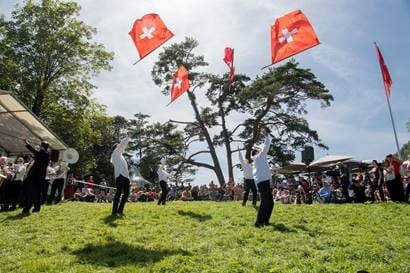 The flag swingers from Weggis 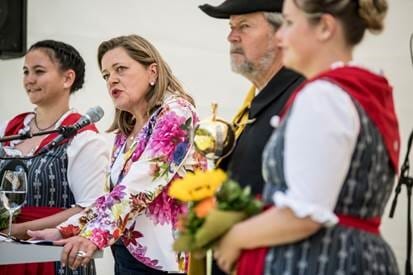 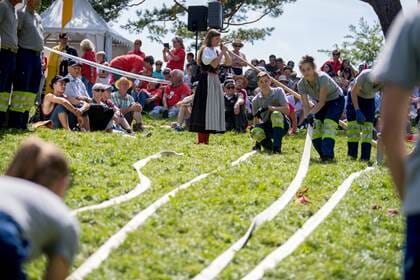