National Day celebrations at the Rütli on 1 August 2017
At the National Day celebrations on the Rütli, Federal Chancellor Walter Thurnherr delighted the 1300 guests with a thought-provoking address. Eveline Widmer-Schlumpf, President of Pro Senectute, spoke about the challenges facing the organization, which was founded in 1917 by the SSCG. Crossbow world champion Joël Brüschweiler managed to hit not only the legendary apple from ten metres but also a cherry. And alphorn virtuoso Enrico Lenzin accompanied MISS HELVETIA Barbara Klossner, who sang the new national anthem.

With temperatures exceeding 30° Celsius, the approximately 1300 guests sought shade under parasols, trees and hats. The atmosphere was already livening up by midday, when performers encouraged the audience to join in with the yodelling, flag-swinging and “Talerschwingen”. Mike McCardell, the leaseholder of the Rütli meadow, and his team served guests with traditional Swiss fare, such as Alpine macaroni, pasta and apple sauce and a wide choice of sausages.

The guests included 120 diplomats from over 30 countries, who represent their countries in Switzerland or at the UN office in Geneva.

This year, the SSCG invited Pro Senectute, of which it is the founder, as a partner organization to the National Day celebrations. Pro Senectute is the largest official body in Switzerland to offer advice and services for the aged and is celebrating its centenary. Eveline Widmer-Schlumpf, who took up her role as President of Pro Senectute Switzerland in April, talked about the organization’s past and future challenges. As the new President explained: “An exchange between the generations is valuable for everyone and creates experiences money cannot buy. The more we discuss things with other age groups, the better we understand each other. Each of us has a responsibility for helping to maintain tolerance and understanding and for seeking contact with younger or older persons outside of our own families. If we bear this in mind, we will all benefit in the future from the mutual solidarity of a multi-generational society.”

Federal Chancellor Walter Thurnherr, who has served as chief of staff of the Federal Council since 1 January 2016, entertained guests with his witty and thought-provoking address. He said: “We would have every reason to be coolly self-assured. Not because we’re the chosen ones, unusually industrious or particularly smart. Not because we’re different, but because we do certain things in different ways. We have a different form of government, we have different kinds of organization and we take a different approach to development. Other states retain their constitutions and regularly change their governments. We keep our government and regularly change our constitution. And that’s a crucial difference! But we won’t find any solution in our constitution to the global refugee problem. And no initiative can guarantee that the glaciers won’t melt. No referendum can protect us if the global economy suddenly takes a dive. Things have not become easier, but more complex. The 1st of August is an opportunity to remind ourselves that new problems exist, that we need to do some serious rethinking and that we will probably have to come up with some new answers.”

Between the various addresses, alphorn virtuoso and percussionist Enrico Lenzin, yodeller MISS HELVETIA Barbara Klossner and crossbow world champion Joël Brüschweiler gave the audience a demonstration of their musical and sporting talents. Klossner and Lenzin performed together to give us a rousing version of the proposed new Swiss national anthem, while a dozen ladies of honour, who will take part in the Unspunnen Festival at Interlaken in August, presented the new Interlaken Edelweiss costume designed by Malou Balmer. Chairman of the organizing committee Ueli Bettler encouraged guests to pay a visit to the Unspunnen Festival, where the Swiss Youth Choir will perform the national anthem with its new lyrics at the official ceremony. 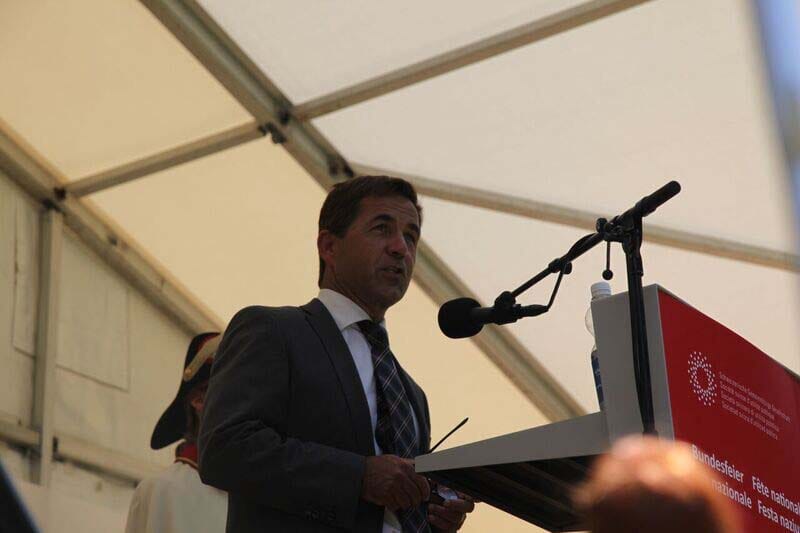 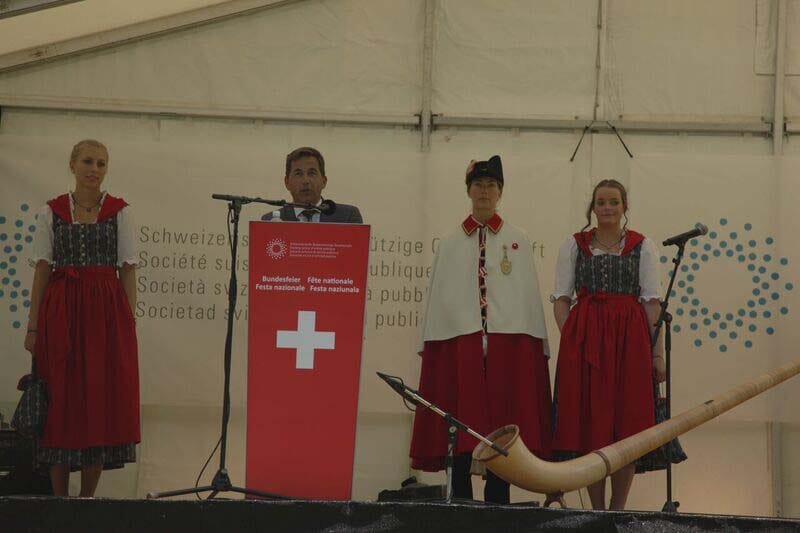